For holidays, birthdays, and other major events, consumers sometimes struggle to decide what gifts to buy for their loved ones. This platform aims to be an ideal destination where users can curate a collection of desired items, and their loved ones can see the list to help determine what to buy for them. The application will help take the guesswork out of gift giving by making wishlists easy to compose, organize, and distribute.

*This project was a part of my capstone course in DePaul’s MS HCI program.

The final deliverable was a high fidelity prototype.

I started my competitive analysis by doing a competitor discovery that involved online search landscaping. Using Google Adwords Keyword Planner I was able to search for high ranking keywords to do with gift lists and wishlists. I then searched each keyword and took an inventory of organic and paid results for each keyword. I came up a list of 20 websites competing for the keywords.

I proceeded to analyze the list of competitors based on their Product Diversity Ranking (1 to 5 scale ranking of the diversity of features within the website) and the Unique Daily Pageviews. After removing some big box retailers and ecommerce behemoths such as Amazon, Target, Walmart and Ikea, I was able to determine that major sources of competition come from gift registry websites that focus primarily on wedding registries. These registry sites offer many features like registry syncing from different stores, group funding, and visibility of purchased items.

For our particular product, we wanted the solution to be more broad in use cases, be it a personal list of things that a user would like to buy for oneself, creating a list of gifts for a friend for an upcoming party, or purchasing gifts for loved ones for the holidays. 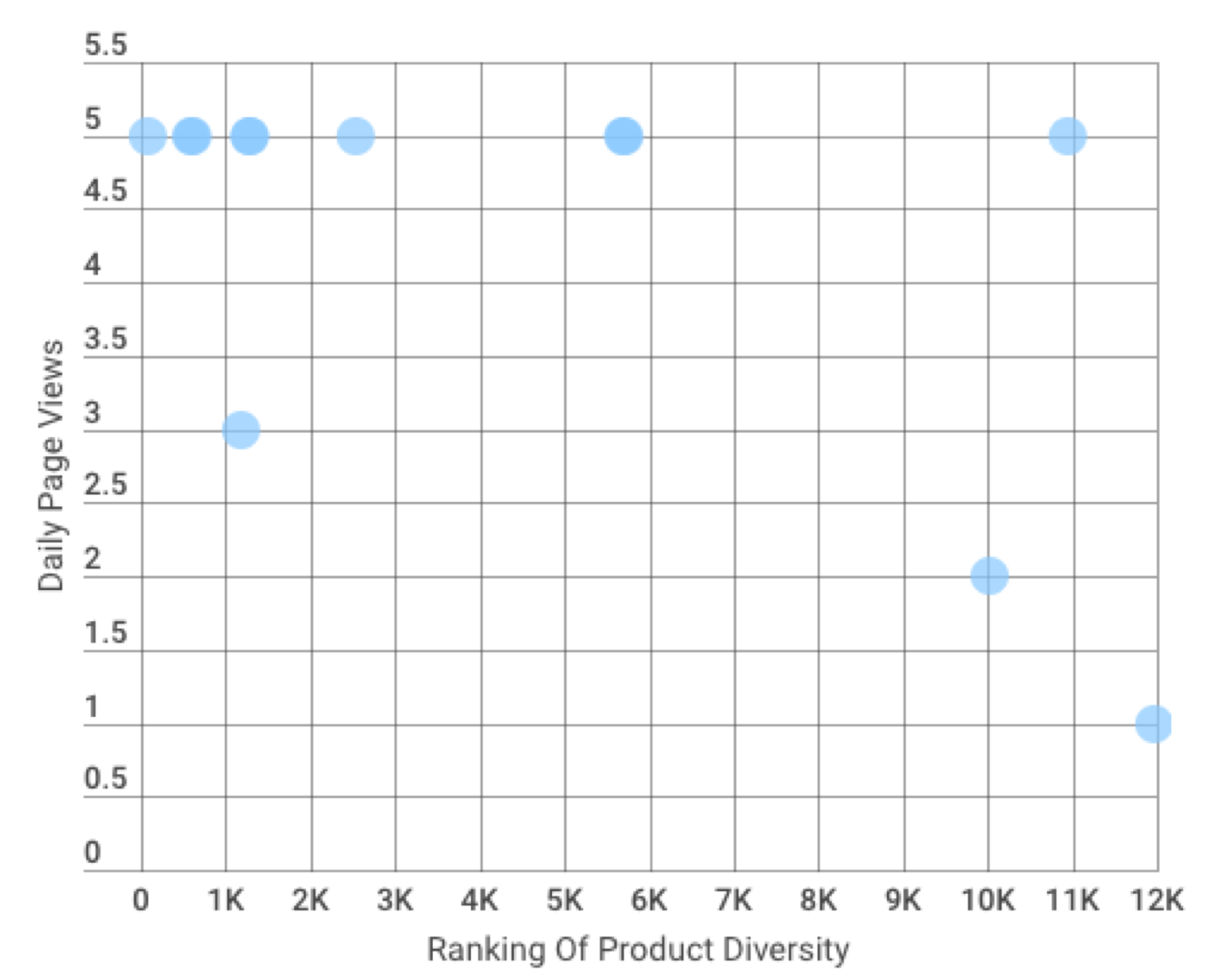 To discover the main objectives, motivations, and methods of users when they create wish lists and purchase gifts through an app.

Through this discovery process, we aimed to study three high-level topics: if technology can assist users with sharing desired items and determining what gifts to purchase, and if technology can help users catalog the things they desire. Five individuals ranging from ages 23 to 54 participated in an interview that included two warm-up questions, five general questions, three deep focus questions and two wrap up questions.

To assess perspectives and attitudes about online shopping, specifically within a smartphone app, and to determine what users want in an e-commerce app and what they have purchased from an app in the past.

We developed a 29 question survey. The descriptive goal of the survey was to profile the audience and the exploratory goal was to explain people’s beliefs and behaviors by uncovering relationships among the answers. In writing the survey questions, we aimed to develop a query that every potential respondent will interpret the same way, respond to accurately and be willing to consider. The types of questions included multiple choice, Likert scale, checklist, and open-ended. The survey was sent out via Google Forms and there were a total of 24 responses.

We conducted 25 surveys to gain insight into how people shop and how they create and maintain gift idea lists. Most respondents reported shopping in a brick-and-mortar store 1 to 4 times in the past month. Most also reported that they shopped for gifts using their mobile device  (for example, through apps such as Amazon or Etsy). Our respondents also placed importance on easy share-ability of gift lists.

Working with data from our surveys, we created two personas of what we believed would reflect our app’s typical target users. Greta Giftgiver is a married mother of three who wants to be able to sort through multiple wish lists. She used to create gift idea lists on paper but since she started using a smartphone, she has switched to keeping lists digitally on her phone. Brad Birthdayboi is a graduate student whose birthday is coming up and his family wants to know what to get him for his special day. A frustration of his is receiving gifts he doesn’t like or need.

We then wrote brief user scenarios to help us conceptualize how a typical user might use our application. In Brad Brithdayboi’s scenario we walked through the steps a user may take to download the app, search for a gifts they’d like to receive, filter the search results, add products to their wishlist, and share their list with their friends and family. For Greta Giftgiver’s scenario we described how a user would download the app, search for gifts within multiple ecommerce stores, create individual lists, and add items to those lists. 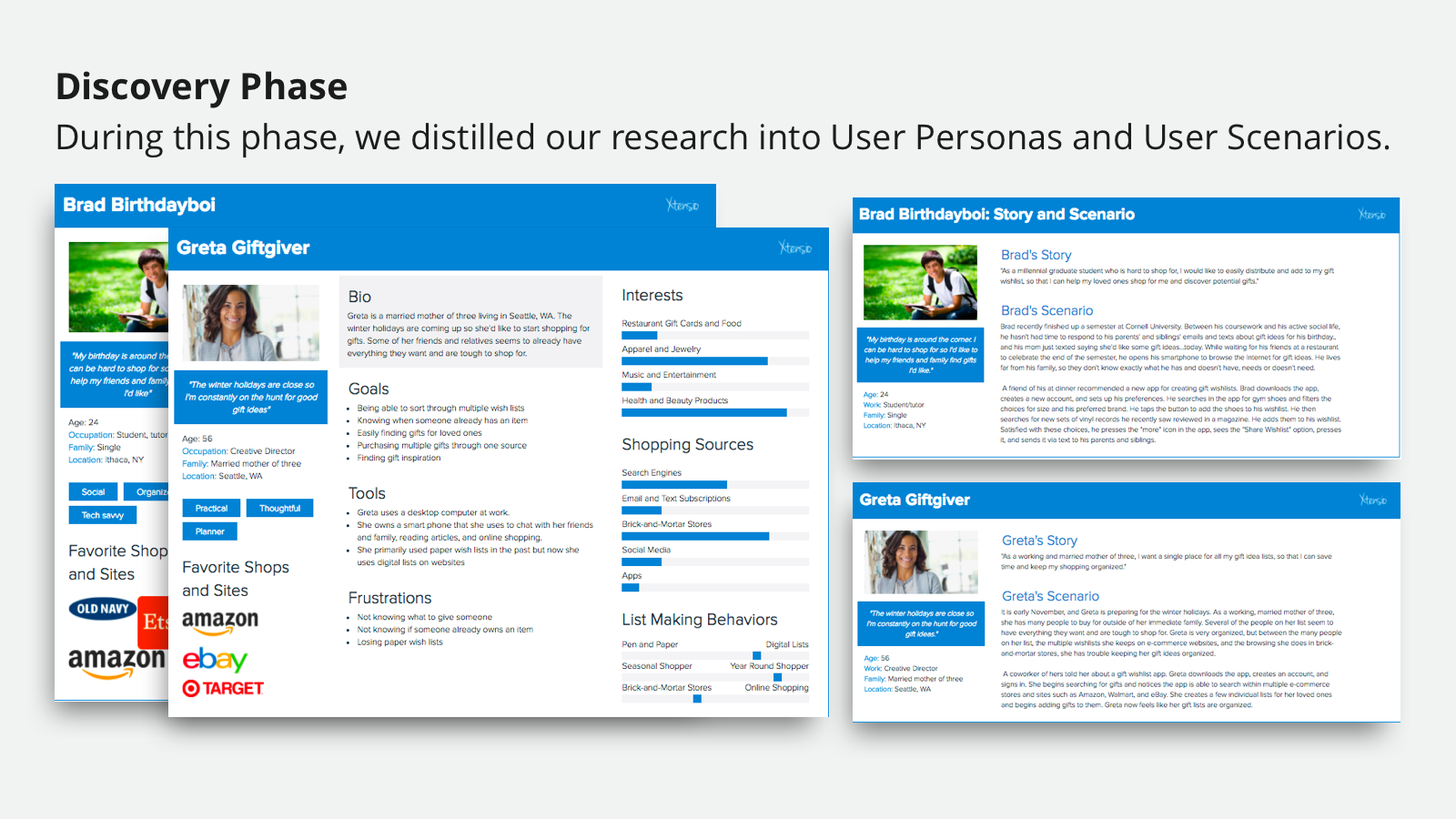 Using the user personas, scenarios and product feature matrix, I organized and facilitated a Collaborative Design Workshop. For a detailed account of how to facilitate a collaborative design workshop, read my article on Medium.

Coming out of the workshop, we had a collection of design patterns to potentially pull from when creating the initial lo-fi prototype of the app.

We developed a lo-fi prototype using Axure RP 8, and set up usability tests with a group of participants that we screened out of a participant pool to match our target demographic. The first round of tests were performed in a Usability Lab.

Using Sketch along with the Craft plugin by InVision, I created a high fidelity prototype of the GiftListr mobile app for iOS to be consistent with the the findings from our usability testing. 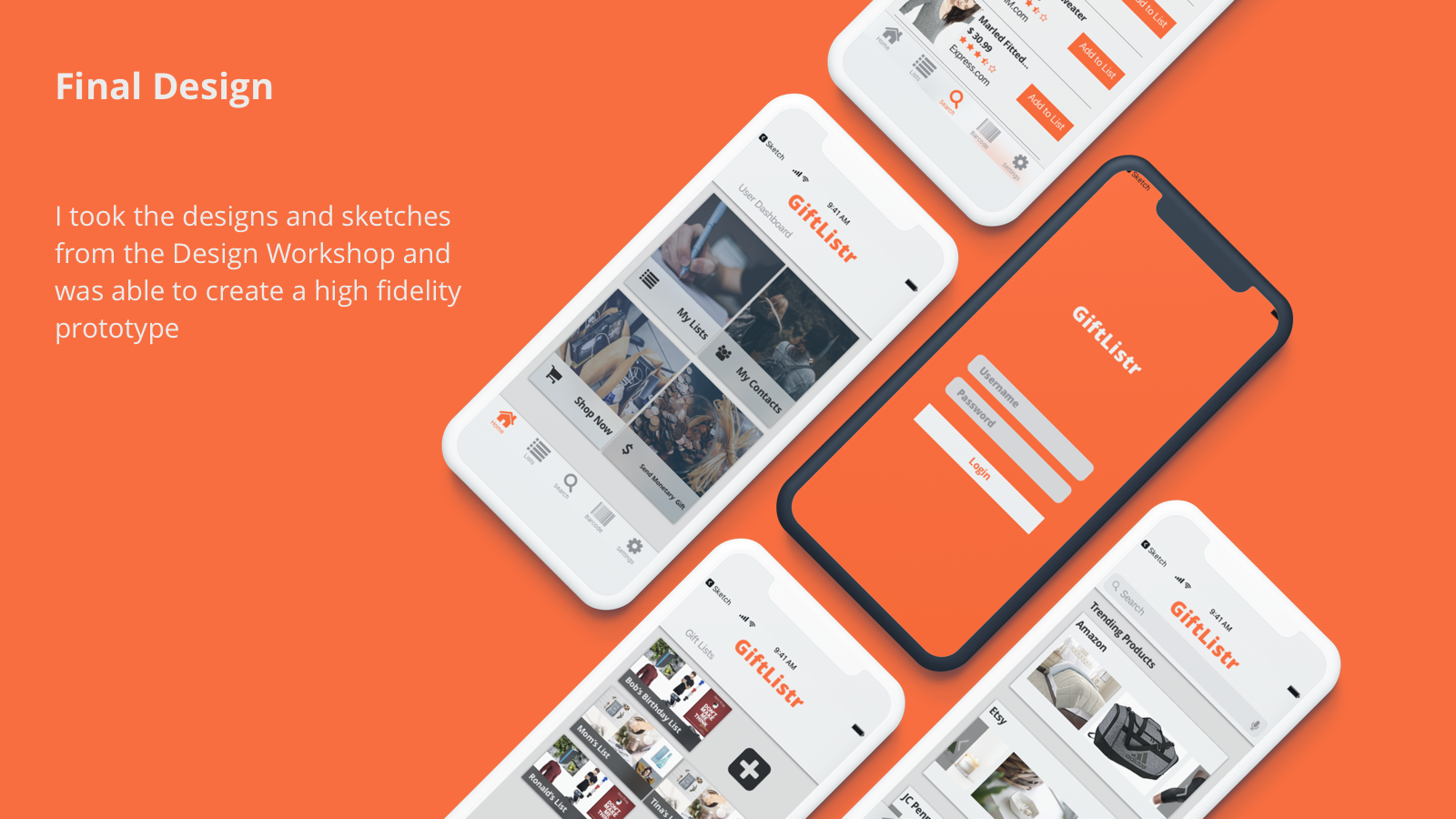